Wernick Refurbished Buildings specialises in the provision of cost-effective, refurbished, portable and modular accommodation. As one of the UKs largest specialists in this field we are able to provide a comprehensive service that includes consultation, planning applications and building regulations approval, site survey, total refurbishment, installation and commissioning.

Our extensive stock includes a wide range of modular buildings, including multi-storey and single storey units and all types of cabins, welfare units, anti-vandal units, mobile and storage units. We are also able to design a hire package to suit any type of building required.

Wernick Refurbished Buildings is part of the Wernick Group of Companies. 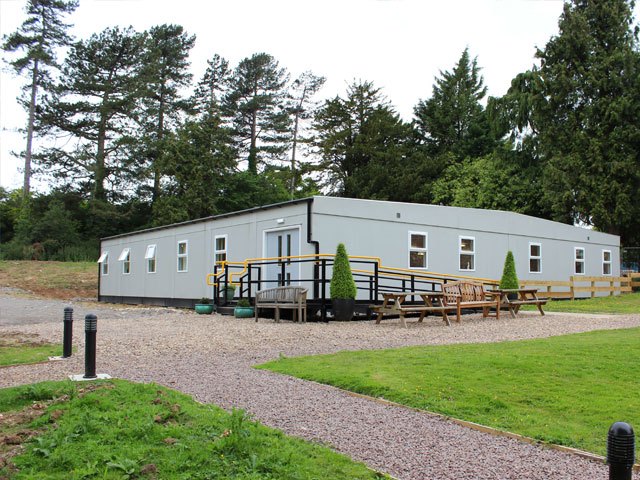 “It’s completely gone – it’s a write off,” was how Stuart Flynn, owner of Kenwick Park Hotel, described the hotel’s leisure complex after it was ravaged by fire. Over 40 firefighters attended the scene, with guests needing to be evacuated as a precaution against the blaze spreading to the hotel building.

The fire was well contained however, with no injuries and surprisingly little damage to the building’s surroundings. A memorial bench situated inches from the building, for example, escaped the devastation unharmed. “It is bricks and mortar at the end of the day,” commented Stuart. “No one was hurt and it will rise again. We will do what we always do and keep going.”

The facilities in the building were not only used by hotel guests, but local families, retirees and community groups. The question now facing the hotel was where these members could go while a new building was constructed. Acting decisively, the hotel entered talks with Wernick Refurbished Buildings about the possibility of using a modular building for an interim gym. Within days the contract to construct foundations and provide a temporary building had been signed.

The design of the building was based on a sketch by the Leisure Complex Manager Richard Arnold, who was confident from the outset. “I knew, speaking to Wernick, that they would provide us with a fantastic building for a year.” Needing to incorporate a reception area with lockers, an exercise room and a gym area, the appropriate modules were chosen from stock and refurbishing work began immediately.

Once the work began, installation of the building took only four weeks.  It opened its doors fully equipped in late December; in time to help with members’ New Year’s Resolutions. It will take approximately a year to replace the original complex, which also featured a swimming pool, beauty salon and squash courts. “We owed our members a facility to take them through to the New Year and our new building,” said Richard. “I’d have no hesitation in recommending Wernick. From start to finish, nothing was a problem.”

Wernick Refurbished Buildings (WRB) take pre-owned modular buildings and give them a new lease of life.